At Lumber Jack’s we offer a wide variety of fun axe throwing games, igniting your competitive spirit! Let’s take a look at just how to keep score.

The confetti falls in a crepe paper rain of red, white, and blue, filling the arena with swirling color. The points have been tallied, the axes all thrown, now there stands an axe throwing winner before us. As the fanfare fades and the crowd shuffles out of the stadium, onlookers may be asking themselves: “How do they keep score at the world axe throwing championship? How is that different from when I play at my favorite axe throwing facility, Lumber Jack’s Axe Throwing?”

At Lumber Jack’s, our scoring system isn’t quite as intense as the world axe throwing league, but we certainly take inspiration from it! We build our targets patterned after the WATL target standards.

Target Anatomy – The Four Rings and the Bullseye!

🎯 The Outer Ring is scored with one point per axe thrown here.

🎯 Each ring going towards the center increases the score by one. As you move toward the bullseye, each ring is a higher valued ring by one point increase. There are three circles painted in a black outline between the outermost ring and the bullseye. These rings account for points 2-4.

🎯 We double down on our bullseye. 6 points are awarded to axe throwers who perfectly hit the center of the target.

🎯 The outer ring is also home to our Blue Dots. The rest of the axe throwing world calls these tiny spots “the kill shot” but like. That sounds reasonably violent and not at all our vibe. So if you’re an axe throwing pro, and you’re reading this blog for some reason, when we discuss Blue Dots: that’s your kill shot.

Blue Dots are worth 10 points. They are particularly tricky to hit, and are a high risk target to go after, but can reap high score rewards! They are located opposite each other in the top right and left quadrants of the target.

🎯 When scoring at Lumber Jack’s Axe Throwing, we always take the higher number. If an axe is thrown on the line, the higher point value is awarded. This goes for the bullseye too. If your axe blade overlaps the center dot in any way, we call that a bullseye.

The Blue Dot has special rules though, and this can even vary by axe-pert! Typically, we want to see blue on both sides of your axe blade. It’s a tough spot to stick for a reason! Close only counts in horseshoes and hand grenades.

If you’re interested in building your own targets, you can read all about that in our post: What is the Best Wood for an Axe Throwing Target?

Our targets are cottonwood & pine with Douglas fir base and head boards. What this means for throwers is that the center three boards are softer, and more receptive to axe blades. This makes bullseyes and high scoring throws easier to stick. Throwing axes at the Blue Dots is especially challenging because the outer two boards are pine, a harder wood. 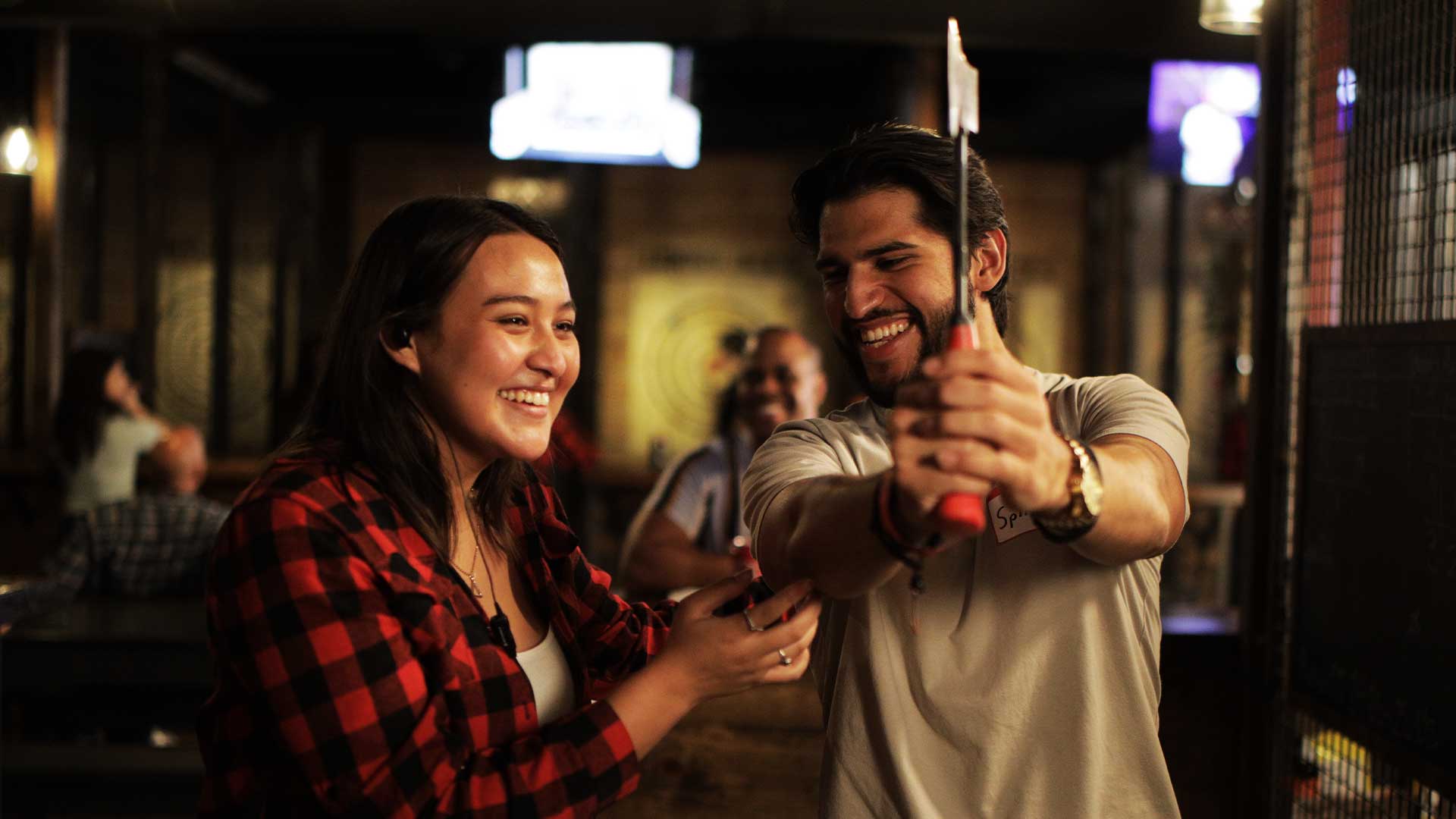 Hey Real Fast, How do you Throw an Axe?

You can read all about axe throwing rules, helpful tips, and the sport of axe throwing in general over at our blog post: How to Throw an Axe. Here’s a few things to keep in mind when preparing to learn the proper way to throw an axe at a target.

At LJ’s, we show all of our guests the proper way to safely throw an axe.

Stand at the throwing line, facing the target. Keep a firm grip on your axe handle, but no need to white-knuckle it. (Avoid stitches and other injury by only grabbing the axe handle. There is no need to touch the axe blade.)

Hold the axe at arms length in front of you, blade facing toward the target. Line up your shot with the axe head and keep it straight as you pull it back and up over your head. Keeping the axe as straight up and down as possible will help ensure that the axe sticks into the target. Usually when an axe bounces off the target, it has more to do with angle and follow-through, rather than needing more power behind the throw.

Now it’s time to throw. As you swing forward, release that firm grip as the axe passes just in front of your eyes.

Let’s play a game! Our “Full Experience” axe throwing guests are taught to play three of our most popular games. Divided into two teams, groups score points based on their throws. Points are awarded differently for each game. The team that wins each game is given a small trophy for their efforts.

It’s a lot like the game HORSE in basketball, but with axe throwing! It follows the same basic rules: The highest score per round continues unscathed, the lower score takes a letter. The first team to spell out TIMBER is the loser!

The game consists of as many rounds as necessary to complete the word, but needs to last a minimum of six throws. This is the perfect beginner axe throwing game because it gives players a low-stakes opportunity to start throwing and work on perfecting their throwing motion.

We use the same target for a wide variety of games. Tic-tac-toe is next up! Pretty standard game, right? Throw your axe, get it to stick to the target, and wherever it lands will match up with a tic-tac-toe board!

In this game, you might be aiming for the outer ring more often than the bullseye. It’s unusual that a player throws a 1-pointer and screams as excitedly as a Blue Dot (kill shot.) But that might just win you the game! This game can be won in a single match, or best two out of three.

Our next axe throwing game is similar to Blackjack and The Price is Right (COME ON DOWN!) First to 21 has a maximum score of 21, but it’s just a matter of getting there! The goal is to score 21 points in the fewest throws possible.

This is a simple score-keeping game that doesn’t involve much strategy. A player simply adds up their score after each throw and tries to get to 21 the fastest! If you’re at 18 points, and you throw a bullseye, that’s too many points. You’re well over 21! Now, we’re not that mean, we don’t subtract points if you throw over, you just need to hit 21 exactly.

Our axe-perts have a variety of games to choose from when teaching our guests the sport of axe throwing. Around the World is another standard game where axe throwers attempt to hit inside each of the four rings (and the bullseye) twice, moving from left to right across the target.

Other games to play include Cricket (hit every number 3 times), and Bullseye Roundup: hit as many bullseyes as possible in five throws. We try to keep things fresh, having a variety of games on rotation.

In order to determine the all-time winner, scores are tallied and compared. We refer to this last round of ten throws as “THE FINAL THROW!” Points are scored with each throw. The players enter a sudden death round where they must get their axe to stick to the target in all the right places! At the end, the player with the highest score in ten throws is the winner!

Now that you know the basic rules of a few of our axe throwing games, let’s take a look at how the pros score their games!

Before diving right in to the scoring itself, let’s talk safety basics in the professional world of axe throwing. In reference to the axes themselves:

To ensure safety for all throwers and spectators, axes may be inspected by an official at any time. Axes must adhere to WATL specifications and guidelines. Broken axes may not be used under any circumstance.

If an axe breaks during the competition, and the participant would like to switch axes, the switcheroo must be done under the supervision of the officials. There is a strict time limit for retrieving new axes.

If an injury severe enough to stop the normal flow of play should occur, the injured thrower must be checked-out by a judge and/or onsite medical professional. (In a sport with a scoring system that includes the label “kill shot,” it makes sense that medics would be standing by!) Injuries are rare; axe throwing is actually a very safe sport when practiced properly. You can learn more about safety and axe throwing in our blog, Has Anyone Died Axe Throwing? Spoiler Alert: No, “Sudden Death Rounds” don’t literally mean anyone will die!)

If the thrower is well enough to continue participating, the match may proceed as normal.

According to the official rules, “If an injury occurs in a tournament, and the thrower is deemed unable to compete due to injury, any pending throws will be marked as 0 points and future matches forfeit.” That’s a total bummer, dude.

Participants must grip the axe by the handle only. I’m not sure what kind of crazy trick shots can be accomplished by throwing the axe by the blade, but I feel like holding the handle is the best way to avoid stitches.

“Axes shall never be thrown when a participant is picking up an axe from the target area or when a judge is in the lane. This will result in an immediate disqualification (counted as a loss) for that match.” This is a total common sense rule: If you’re going to throw an axe AT A PERSON??? You’re disqualified from like, life.

(WATL), the sport’s governing body, keeps score in two categories: scoring zones and axe handle hits. Scoring zones are split into two sections, yellow dots (bullseyes) worth 5 points each, and hitting the red band surrounding them worth 2 points. Axe handle hits are 1 point each. The axe blade must stick in the target to result in full points awarded. You can find WATL Leagues at many axe throwing venues. Lumber Jack’s is currently working toward starting our WATL compliant league! Stay tuned for more information regarding our leagues!

As you can see, this scoring system is very close to how we do things at Lumber Jack’s. We are a little more generous on what counts as a bullseye, and award two extra points for our Blue Dot throws. Home scoring like this will likely differ from axe throwing venue to axe throwing venue.

A standard game at Lumber Jack’s lasts about 15 minutes of back and forth throwing. Often, the final throw determines the winners! Typically, we split groups into two teams, measuring individual points and team hits alike. The first team to snatch a win is awarded a glittering, golden thumbs-up trophy. These trophies are temporary, but the feelings of victory are forever.

So there you have it, axe throwing scoring! As always, if you have any questions or concerns please do not hesitate to reach out to us at Lumber Jack’s. Our axe-perts are standing by, ready to go over basic rules, helpful tips, and answers to your burning scoring questions. We would be more than happy to help you get your axe throwing game on point. Come play with us soon! Happy throwing!